Ed Attanasio, 61, started sketching as a form of rehab after he had a mini-stroke on August 4, 2009. Little did this San Franciscan know that eventually his illustrations would lead to a career as an artist, astounding critics, gallery owners, his friends and even himself.

Attanasio’s stroke didn’t affect his motor skills, but it definitely scrambled his brain to the point where he was unable to continue his job as a journalist/advertising copywriter. It was a scary time for Ed, because he weighed 350 lbs. and at age 50, he also had other health issues.

One afternoon, Attanasio’s speech therapists suggested that he should get involved in some type of activity where he’d be using his brain on a daily basis. So, he started drawing a series of illustrations on Post-It-Notes, for hours and hours while he underwent a 14-month recovery.

Ed drew these characters only as part of his therapy and nothing more, he explained. “I never thought anyone would see them and I surely never imagined I could sell them. My wife Simone and my stepdaughter Zoe always seemed to enjoy them, but eventually they would migrate down to our refrigerator door and after a while, they'd disappear. I figured they were getting tossed, but I wasn’t concerned, because I could see that I was steadily improving and knew the art played a role.”

Then, in October of 2011, Attanasio’s wife Simone handed him a notebook and all of the drawings were there—close to 400! During those 14 months, he had created a wacky collection of baseball and football players, gangsters, dinosaurs, dogs, birds, monsters and aliens.

“All of these peculiar-looking illustrations that had emerged from my stroke-scrambled brain were all together and ready for something…but what?” Attanasio said.

As he browsed through the images, Ed thought wow--these characters drawn in black felt pen and colored pencils tell a great story. “For more than a year, I didn’t know if I would be able to be a professional writer again and these drawings are a map that shows how I recuperated….or maybe digressed, depending on how you look at it,” he laughed. “After I went through all of the images, I assembled them into a series of collages and that’s how the whole thing really began.”

His very first assemblage was of baseball players that Attanasio envisioned that played in the 1910s, he said. “My first collage of 48 imaginary baseball players was called Bushers--Players Drawn from Left Field.” Pretty soon, I assigned each player with his own name, complete with a colorful nickname and a biography describing his baseball career. It became a fun project and just another way to exercise my brain, but at that point it was really nothing more.”

Then one day, Attanasio decided to submit his “Bushers” to an upcoming show at an art gallery in San Francisco. The George Krevsky Gallery of American Art was holding its 15th annual baseball art exhibition called The Art of Baseball. But after a couple of months of anxiously waiting for a response from the gallery and not hearing back, Attanasio figured that his players were probably too bizarre for their show.

“I resigned myself to the fact that my sad-sack “Bushers” may never get out of the minor leagues. Then, one day the phone rang and the people at the gallery were on the other end. When they said that they liked the image and wanted to meet me, I was obviously very pleased and surprised. In the end, the image was accepted into their Art of Baseball show and even before the exhibition began it was sold!”

Today, Attanasio continues to draw on Post-It Notes and he sells originals and prints for prices he could never envision. In 2013, Ed’s “Bushers” became a graphic novel and shortly thereafter his art career began really began to flourish. Known as “outsider art” or “folk art” Attanasio’s Post-It creations have sold online and through galleries in the U.S., UK, Australia, Germany and Russia, just to name a few. 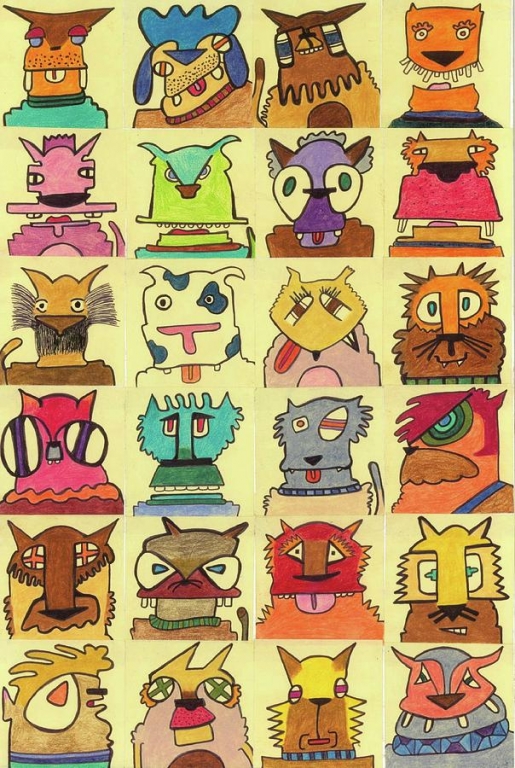